Having grown up in America, I recall the days of my youth when cigarette smoking was still considered to be more vogue than it is now, and certainly, at least, more tolerated. I recall ads featuring pretty ladies smoking Virginia Slims on the back covers of my mom's subscription magazines. At age eleven, I recall flying on my first commercial domestic flight seated two rows away from the smoking section and thinking to myself, "How does the smoke know to stay in its designated section?" I soon learned that it doesn't. I had friends whose mothers smoked Camels and Pall Malls. My grandmother had a two-pack-a-day habit that lasted through my childhood years until she quit at the age of eighty. I blew my allowance on candy, and, more than once, purchased those candy cigarettes laced with powder that mimicked smoke. I attended a high school that had its very own outdoor smoking section called "Smokers' Cove" or simply, "The Cove". At age fourteen I was pressured to smoke a cigarette by well-intentioned friends who simply wanted me to feel like part of the group (this is a nice way to re-frame peer pressure, don't you think?). Despite my not wanting to, I took a puff and tried to look and act cool when I began coughing uncontrollably. That was the end of that. Somehow, despite all of my exposure to smoking during my formative years, I knew it was not my thing.

Thankfully, California voters decided years ago, it's not their thing either, at least in public places. My state's tendency to attract those leading a health-conscious lifestyle also contributes to a relatively low number of smokers. I go about my daily life without hardly ever coming into contact with cigarette smoke.

Then I moved to Paris.

There are three significant ways in which French smoking negatively affects my Parisian life:

1) I can't walk out the entry door of our building without being enveloped by a cloud of cigarette smoke.

There is a daily mob of smoking teens who attend the private Catholic school across the street that congregate on the sidewalk inches away from our building's entry. Turns out, this is because by age 11 about 10% of French kids start smoking and by the age of 15 over 50% of French youths are regularly inhaling tobacco.


Parisian sidewalks, including the one in front of our building, are regularly littered with cigarette butts. Both store-bought and self-rolled ones. Rolling one's own cigarette is a very popular thing here.

2) I can't dine outdoors at restaurants without swallowing fumes along with my meal.

About five years ago, France passed a law banning cigarette smoking inside public establishments. Unlike California's smoking ban, French smokers can smoke on the premises of a restaurant as long as they remain on the outdoor patio or sidewalk. Two weeks ago, my friend Renee and I were enjoying a mid-day shopping break refueling with a beverage outdoors at a bustling cafe on the Left Bank (our main intent really was to gain access to a bathroom).

We chose to sit outside since that is where all the best people-watching occurs. I encouraged Renee to sit facing the street where she would best be able to take in the passing fashion show. I sat facing her and the restaurant. The seating was tight and compact, typical for Parisian cafes. Inches away, to our right, was a group of women, all of whom lit up shortly after Renee and I took our seats. The slight breeze blew their smoke directly into our faces. Without many options to avoid their smoke, I scooted my stool over to the left and back a few inches. Soon after, a waiter came over to tell me that I must move my stool back to it's original position. Reading the perplexed look on my face he quickly added in his thickly accented English, "Eet ees za rrrule." Those damn French rules again! He failed to notice that after following his rule, I moved my stool back to it's rule-breaking location as soon as he left our table. Yet, despite the slightly increased distance between my seat and the smoking ladies', I think I vicariously smoked at least a pack that day.

I wish sitting outside to see and be seen wasn't such a hazard to my health here. I appreciate that California does not force me to choose between dining al fresco or protecting my lungs. The next time I find myself enjoying a meal outdoors back home at La Boulange, Chow, or Va de Vi, I will surely feel much more grateful.

3) I can't run on Paris's lovely Promenade Plantée without routinely inhaling a pedestrian's smoky exhale as I whiz past.

I see more smoking pedestrians on this trail than I do power walkers and runners. There is an overall lack of embracing fitness and exercise here, and smoking fits in well with this lifestyle choice. Heck, 30% of French doctors smoke (compared to 5% of American docs) and they're the ones who should really know better.

French parents smoke with little apparent concern for the effects of second-hand smoke on their children.


As a non-smoking Californian, it is hard for me not to feel judgement creep in when I witness a French mother smoking a cigarette and holding hands with her toddler while waiting in front of the school for her older child to emerge at pick-up time. This is a sight that I never see in my community back home. I assume this is because California's anti-smoking campaign has had a great impact, particularly on the recognition of the detrimental effects of second-hand smoke. Of the one mommy friend that I have back home who smokes, she keeps her habit on the down-low and never lights up in the presence of her husband or kids. During our girls' nights out, well, as they say, what happens in Walnut Creek, stays in Walnut Creek (or at least more than 20 feet away from doors, windows, air ducts and ventilation systems of enclosed public spaces).

French teachers smoke too, not in the classroom, but certainly in front of the school and in front of their students. For me and my children this is a novel sight. Raelyn's math teacher told her class yesterday, "Don't bother me today! It's been thirty-six hours since my last cigarette, I'm trying to quit!" Not surprisingly, Raelyn reported, "Mom, he was way grumpier than usual today." Coincidentally, I captured one of his last smokes earlier this week in some photos in front of the school. To his credit, he at least told his students, "Don't ever smoke. Once you start, you can't stop." Hopefully, he'll be able to prove himself wrong and walk the talk. I wish him luck.


The other day, I took this photo on the way home from school: 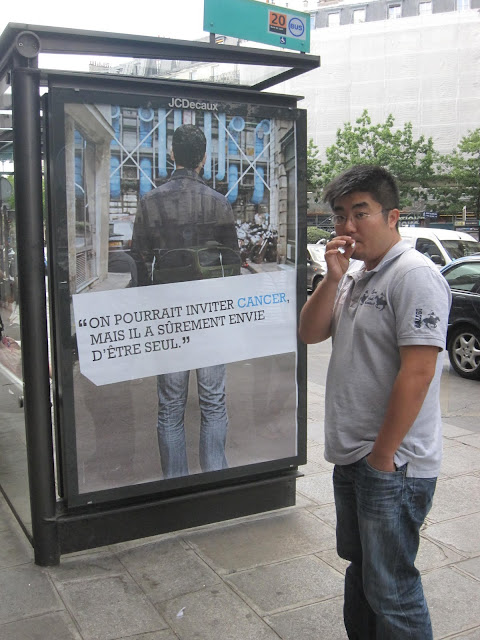 At first, I thought that this advertisement was an anti-smoking one and I felt very satisfied to have captured the irony on my camera. The ad's message, "One could invite cancer, but he definitely would prefer to be left alone," is promoted by France's Institut National du Cancer. I found this out when I saw other similar ads in the Metro station containing their logo. Notice the absence of any tangible reference to smoking in the advertisement. Is the lone guy in this ad supposed to be pondering the thought of quitting smoking as he stares at the side of the Centre Georges Pompidou? Or, is he supposed to be fighting the urge for a smoke before he goes inside to view all of the Pompidou's modern art? Does the fact that I'm not French impede my ability to fully grasp the meaning and message of this ad campaign? Or, is the Institut purposefully using an indirect approach simply because a more blatant anti-smoking campaign wouldn't be well-received in a nation full of smokers? One thing seems perfectly clear; this guy on the sidewalk doesn't seem to be particularly impacted by the ad nor concerned about cancer.

Are the French concerned about cancer? I don't know the answer. According to a recent ranking of global cancer rates, France and the USA are about equal. Same goes for the two country's cancer survival rates. And yet, despite its larger percentage of tobacco intake, France beats America's overall life expectancy rate. What's going on here? Does France's love for croissants, cheese, butter, and wine counterbalance the detriments of smoking? Does America's love for (over) eating all things processed explain its lower life expectancy rate? Hmm...
French cigarette packages do take a more in-your-face approach regarding the dangers of smoking. And they hit below the belt, literally, with health warning messages that target one of the things the French value most. Sex.  This package was discarded in one of our window flower boxes a few weeks ago. I was about to toss it in the garbage when the warning label caught my attention.
What French romantic would ever want that to happen? I did learn that the French anti-smoking movement - yes, one actually does exist- went a bit too far last year according to popular opinion when they tried unsuccessfully to launch this advertising campaign targeted at teens:


The ads are meant to show that smoking creates dependency and submission, but critics of this campaign believe the images trivialize sexual abuse. I can understand both sides of the argument.

What I can't understand is, this: Why do the French, who seemingly have a greater appreciation for a natural beauty aesthetic- particularly when it comes to females- engage in a habit that dramatically shaves years off of this natural beauty in the form of early onset wrinkles, yellowed teeth, and jaundiced-looking skin? Take, for example, our apartment building's Gardienne, a hip bohemian woman with orange dreadlocks, funky boots, tattoos, an eleven-year-old son, and a wicked smoking habit. Her age is a complete mystery to me. She gives off an aura of youth and I'm guessing that she's in her early 40's, but I can't be sure because her skin and teeth look like they belong to a much older woman.

The only upside of being surrounded by all this smoking is that my American-conditioned female self- who wants to stay young-looking for as long as is naturally possible- takes comfort in knowing that in about 10-15 years, I will wind up looking younger than my daughters' twenty-one-year-old (gorgeous) French babysitter. Although she smokes in the presence of my kids- outdoors only- Raelyn and Nola have reported that she strongly cautions them against ever trying a cigarette. This advice coming from a gal who also tans, as many of the French do, both naturally and artificially. Just another means by which I'll wind up looking years younger than her before not too long.

My final thoughts: IF the French quit smoking, would they become fat? AND, if they started exercising, would their current overall life expectancy rise even further? BUTT, it's pointless to ponder these musings because, as we know, the French possess that indefinable je ne sais quoi and who would want to mess with that?
Posted by ma vie est arrivée at 10:02 AM