Walking as much as I do in Paris has required that I develop a new set of guiding principles to assist me in navigating various obstacles during my hours spent as a pedestrian in this (perplexing) 'city of lights' (and poop, tripping hazards, and overzealous street cleaners).

By now, six months into this blog, I must sound like a broken record for going on and on about the dog poop found on the sidewalks, gutters, streets, and even in the Metro stations. I am still uncertain if the Metro poops are of canine origin. But I do know one thing- I am missing out on lots of sightseeing and people-watching since most of the time my eyes are looking downward while scanning approximately ten feet ahead (at least my mountain bike training is proving to be useful) for any upcoming nuggets, piles, smears, logs, or skids in varying shades of brown. Guiding principle #1: Scan my environment.

At least once a day, if not I, then another Kaplan family member, alerts the rest of us, "Watch out, right there!" while pointing to the offensive outputs of a dog's last meal.  It is comforting to know that if I let my guard down for even one second on Guiding Principle #1, that my peeps have got my back. Or rather, my shoes. Guiding principle #2: Warn my loved ones.

My shoes, most of which I adore just a bit too much- especially my Paris-acquired ones- have yet to come in contact with any poop. I have set a goal for myself; to make it through the entire year without stepping in any, and so far, so good. Ironically, the day that I gave Raelyn my old Ugg boots (her foot, at the moment, is also a size 6) she christened them Parisian by promptly stepping in the stuff. Her peeps apparently failed to heed Guiding Principle #2. Thank goodness our building's courtyard has a hose. Raelyn learned how to use it that day. Guiding principle #3: Do not over-parent and do for my children what they can do for themselves (or what I find too disgusting to handle).

The photos below are part of a series of a dozen poop images that I captured with my camera within a two-block stretch of sidewalk between the grocery store and our apartment building. These Parisian streets are filled with so many of these landmines I wish I owned a hovercraft.  Even if I manage to miss the main pile, someone else who didn't has subsequently smeared it in various other places on the sidewalk creating even more obstacles. Guiding Principle #4: Footprints are my friend and a warning device for what's ahead.

In addition to the landmines in the form of dog poop, Paris is a city that surprises me with its numerous puddles of puke. Sure, Paris is a metropolis full of late-night revelers and homeless alcoholics, but so are San Francisco and L.A. and I can't recall the last time I had to  quickly veer left while holding my breath because of vomit on the sidewalk in these two cities. My latest theory is this- the seemingly higher incidence of street vomiting is due to Parisians contracting a food-borne illness from undercooked meat. This notion occurredto me last week as I dined at a restaurant while observing my fellow patrons enjoying their steak tartare. The odds of a Parisian ingesting salmonella or E. coli seem to me to be statistically higher than in L.A. or San Francisco because of the sheer volume of raw meat that is consumed here. Despite the U.S. slaughterhouse methods (Food, Inc. anyone?) which probably means that U.S. raw beef statistically has a higher chance of containing these pathogens, at least most chefs in the U.S. cook the meat long enough to kill them off. It's probably a flimsy theory, but I'm sticking by it. You can thank me for not posting any vomit photos. I actually don't have the stomach to take any. Guiding principle # 5: Continue to refrain from eating raw meat.


With all these messes on the streets of Paris, the city's street cleaners have a very important job. Like all civil servants in Paris, these guys (I have yet to see a female street cleaner) are decked out in their spiffy uniforms; in this case bright kelly green and flourecent citron. They even have matching kelly green vehicles. I am grateful for the bureaucrat whose job it was to decide on the color palette for these uniforms because they are really hard to miss. And it is crucial, if you care to stay dry, to stay out of the street cleaner's way, so I especially appreciate their noticeable attire. Guiding principle #6: Cross to the opposite side of the street when I see a street cleaner person or vehicle approaching. In the video you can see the woman, stage left, who is scurrying to get out of the way...

In addition to spraying the streets clean with blasts of water, the street cleaners are also responsible for directing the flow of water into the sewer system that snakes its way underneath the city's streets. They do this with rolled up swaths of what appear to be carpet remnants. These damp and dirty rolls can be found on just about every block in the gutter in front of the sewer grate. Sometimes the roll is turned parallel to the street, sometimes it is turned perpendicular depending on which way the street cleaner wants to direct the flow of water. If you have managed to successfully dodge the street cleaner's hose, you still have to manage to jump over the mini rivers that are flowing in the gutters and sometimes out into the streets. 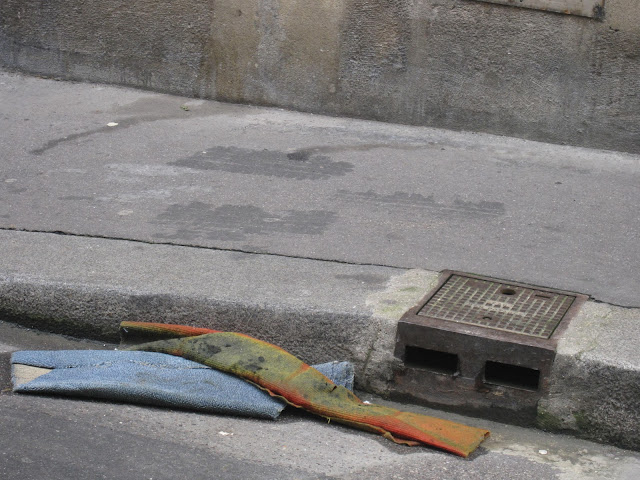 
Now, if all of this wasn't enough to keep me on my toes while out and about, there are plenty of things that could literally knock me off my feet on these Parisian streets. Living in a society that is not as litigious as my U.S. counterpart means that less attention is payed by the city of Paris towards minimizing potential tripping hazards for its citizens. Soren and I frequently run along Paris's Promenade Plantée, several miles of a former elevated train track that has been turned into a beautifully landscaped recreational trail. Fortunately, we have not been tripped up by the metal plates protruding from the pavement along the way, nor the piles of landscape clippings strewn across the path resulting from the hardworking maintenance crew. The City of Walnut Creek would never willingly allow such hazards to exist on their trails and streets.

I recall reading a Contra Costa Times article about five years ago in which it was explained that the new cobblestone crosswalks that had been installed on the newly-opened section of Locust Street were being replaced because citizens were finding it too difficult to walk upon and a few had even fallen. I would hate to see how these citizens would manage as pedestrians on the streets of cobble-stoned Europe. Guiding principle # 8: Wear sensible (but, of course, fashionable) shoes and continue to scan my environment.


It rains in Paris more often than in Walnut Creek so I almost always have a compact umbrella stashed in my purse. However, I usually only dare to use it when it's really coming down because it is an incredible hassle to jostle myself and my umbrella along the narrow sidewalks of Paris with my fellow umbrella users. I often give up my sidewalk rights to make room for passing pedestrians on clear days. Add umbrellas to the equation and I am looking at a potential poke in the eye and another trip to Dr. Bomhof. Guiding principle # 9: Use my umbrella with extreme care and hope that others do the same.

Imagine my condition had I not been abiding by these nine protective measures: Wet, poop and puke covered shoes, bouts of vomiting, scrapes on my hands and knees from tripping and falling on the sidewalk, and a missing eye. Not a pretty picture. I trust that my guiding principles will keep me safe and sound for the next six months. They have been working well for me so far.

add to those that already  me through my everyday existence.
Posted by ma vie est arrivée at 3:34 AM