The Kaplans are now proud owners of one tadpole turned frog and one tadpole soon-to-be frog. The frog was unsuspectingly snatched up from the waters of the Seine river in Gye-sur-Seine, a small village in France's champagne region where the Seine begins as a small stream winding its way through similar quaint villages and towns before reaching Paris. Our second little tadpole guy (or gal?)- who is morphing as I type- was plucked from a pond on the lush grounds of a chateau near France's Fontainbleu. The first tadpole was brought home for curiosity's sake, the second tadpole for the sake of guilt because we never expected the first one to live let alone morph into a frog. That's why Soren made the girls put back the other 38 tadpoles they had collected that day from the Seine, figuring taking the life of one was bad enough, we didn't want 39 dead tadpoles weighing on our conscience. Shortly thereafter, we feared that our frog felt lonely, hence the decision to kidnap his friend from the chateau pond. Bearing witness to amphibian metamorphosis over the past month has helped me to reflect upon the many changes that have occurred individually and collectively for our family as we near the end of our year living in Paris.

One of the more mild, yet pleasing changes (at least in my opinion) is that my husband dresses a little better now. I always call Soren my "cartoon character", an endearing term to describe how, since I first met him, he repeatedly wears the same beloved outfit when we venture out in public (thankfully, not the same ensemble as when we started dating twenty years ago). I think very few people know that my husband actually does own a closet full of clothes. It's just that he ignores most of them in favor of his go-to outfit. A shopper he is not. Soren lives in Banana Republic men's crew neck t-shirts and he stocks up on them once a year during sales. The guy never wears v-necks, never veers away from plain styling, and besides preferring a tight crew neck, he likes the rest of the t-shirt to fit loose and comfortable.  Unexpectedly, Soren actually ventured out this week without his fashion consultant (a.k.a., Me) to take advantage of the bi-annual Paris sales. True to form, Soren went hunting for specific items, t-shirt and shorts, in preparation for our upcoming road trip to the south of France.  It will be quite hot there and he can more easily get away with the Parisian male fashion no-no of wearing shorts. Soren proudly modeled his four new t-shirts and one pair of shorts. He did good! His t-shirts were undeniably more stylish than usual; tighter, with a slight v-neck, and a little button detail along the shirt's placket. In other words, euro-male, which in my book equals sexy. He even wears a winter scarf now (I'm working on the spring one, haven't sold that idea just yet). My husband came to Paris a cutie and is leaving Paris a hottie. C'est très chic!


As for Raelyn, well, she has developed into quite the young Francophile. She woke up one morning, six months into our Parisian experience and declared, "I am not the same person I was when I came to Paris."  Like Soren's, Raelyn's fashion sense has also developed in a European way. She pairs boots with shorts, dares to wear only one knee sock with skirts or shorts, accessorizes with hats and goofy black-framed 3D glasses with the lens popped out, and begs me weekly to be allowed to wear bright red lipstick so as to emulate the young French women (Um, she's eleven, so that is not happening). She has contracted designer fever in that whenever we find ourselves on the high-end shopping streets of Paris, Madrid, or Florence, she likes to go into Chanel, Prada, Fendi, and Gucci and have a look around. I tease here that she'd better start thinking about how she's going to support her high-end tastes. She tells me that she is going to become a fashion designer herself someday and that, when she does, she'll buy me a house. I told her that's great, as long she buys me one in Paris. 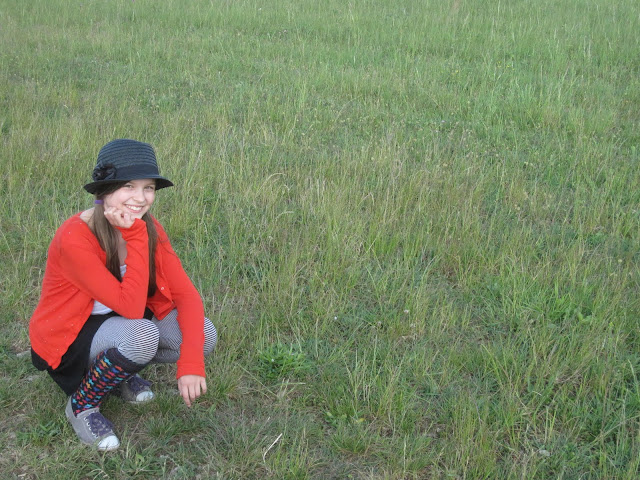 When shopping with Raelyn in France she is very handy to have at my side because her knowledge of French has flourished. I can rely on her to ask the store clerk things like, "Ma mère veut savoir si vous avez des soutien-gorge invisible." (My mother wants to know if you have some invisible bras."). Flushed with embarrassment, Raelyn exclaimed afterwards, "Mom, that is the most embarrassing thing ever!" I need my south of France summer clothing items too ya know. Raelyn also gets embarrassed when Soren or I speak French. Last week, when Soren was speaking French to the pharmasist, Raelyn turned to me while simultaneously crossing her arms, rolling her eyes, and exclaiming through clenched teeth, "Dad is such an American!", because little Miss Frenchie here has adopted the French attitude of linguistic superiority to perfection. Our American accents drive her nuts and she does not hesitate to show us just how much.

As for me, I understand much more French now than when I arrived. The problem with this, however, is that when the French person speaking to me learns that I have just understood what they have said, they simply continue speaking French to me. So, once a French person and I get past the usual and customary utterances during my daily outings and activities, communication can go downhill quickly. If the French words are unfamiliar and/or spoken too fast and contextual clues go over my head, which, sometimes they do, then I become lost in a linguistic fog and the French person becomes confused too because they had me pegged for a Parisian at first (I certainly do try to look like one). When they learn that I am an imposter, my cover is blown, but I do feel secretly pleased when they think I am British rather than American.

My fashion sense has shifted a little thanks to Parisian influences. I do wear scarves year-round now, and boots too. I love wearing therm with shorts. My makeup routine is fresh too; it had become minimal when I became a mother. It just wasn't something I felt like making time for in the morning. Besides, as any new mom knows, when it's a luxury to find time for a shower, there is little time left for any other kind of self-care or primping. For me, this lack of a beauty routine became a habit. My eye makeup routine rarely even consists of makeup. Just curled eyelashes because the beauty magazines tell me that this will help me to look more awake. Paris has helped me to redefine my signature look of curled eyelashes paired with my dark circles and puffy under-eye bags. Now, I have added the quintessentially French and simplistic dark liner on my upper lid paired with red lipstick and a slight hint of blush on my cheeks. With my red lips, who's going to notice my puffy bags and dark circles now? Wish I had known about this trick sooner. 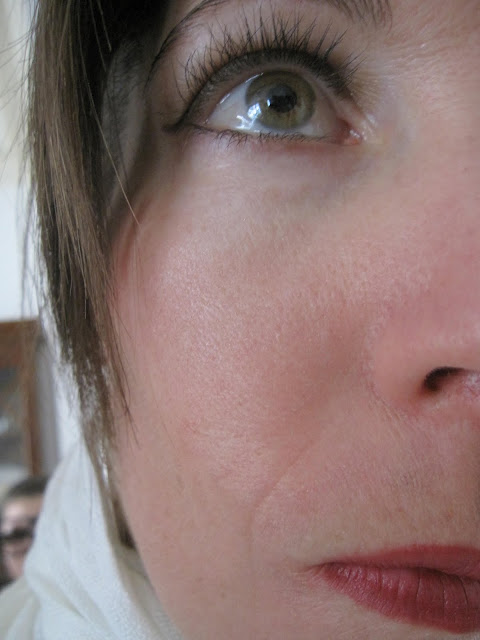 Ever so gradually over the past six months, Nola has taken an interest in things of a feminine nature like never before. This, from a girl who, at age three, declared, "I hate pink and purple, dresses, and skirts. I want pants and shorts with lots of pockets for my rocks and shells." At age 7, Nola was sporting a mohawk and wearing football jerseys. She came into this world a nonconforming female whose path has kept us guessing and who has needed us to remain open-minded and ever so flexible. Our Nola mantra has been, "Who made up these stupid gender rules anyway?" While she is still not a fan of dresses and skirts, Nola is, for the first time ever, shopping in the girls' department. Her new interest in female clothing extends to her expressing desires for my clothing when she grows big enough to wear them. Raelyn is claiming dibs however, since she beat her little sister's request by about three years. Nola's hair has not been cut for one year. I keep thinking she is going to ask for a short cut again, but the other day she stated, "I like my hair long, I want to put it in a ponytail." I thought it was my imagination at first, then I saw her emerge from my bathroom with one of my ponytail holders. I assumed she needed a lesson on how to make a ponytail since her hands had never before attempted this task. But she brushed me off and had a completed ponytail within a couple of minutes. I had another mind-blowing moment yesterday when Nola asked to buy a purse. Well, she didn't use the word purse, my guess is that some things are still considered too girly for her. She actually used the word "bag" instead. Taking advantage of the Paris sales, she happily selected her first ever "bag",  girl shorts and girl t-shirt which even has a slight sparkle to it. Nola made sure to stipulate that pink and purple and anything flowery were off-limits. Like mother, like daughter. For the past three weeks, Nola has taken to polishing her nails. She especially likes that new Crack product which she purchased in black and layers on top of red or nude nails. The other day, we ladies enjoyed our first at-home mom/daughter mani-pedi session. Nola had always opted out before. I think that Nola is deserving of her own word given the mega evolution she has undergone this year. I refer to her process as "Nolamorphosis". She came to Paris looking like a boy, but she is preparing to leave looking like a girl. I can't help but wonder if this transformation would have occurred if we hadn't moved to Paris? Is Parisian fashion culture truly that powerful? Are hormones at work? Or is it the long-term separation from her male buddies back home? I'll never know. But that's okay, I like both Nolas and should she gravitate back towards boyish Nola, well then, we have our mantra for that.


Granted, I am skimming the surface, literally, of my family's changes this year by focusing on those that don't go past skin-deep. Or do they? More on that when you tune in next time. Suffice it to say, the Kaplans that arrived here last August the 3rd will not be the same Kaplans who return to Walnut Creek this upcoming July 28th. For one thing, we might be arriving home with two frogs. That is, if we can get them past airport security.
Posted by ma vie est arrivée at 3:14 PM