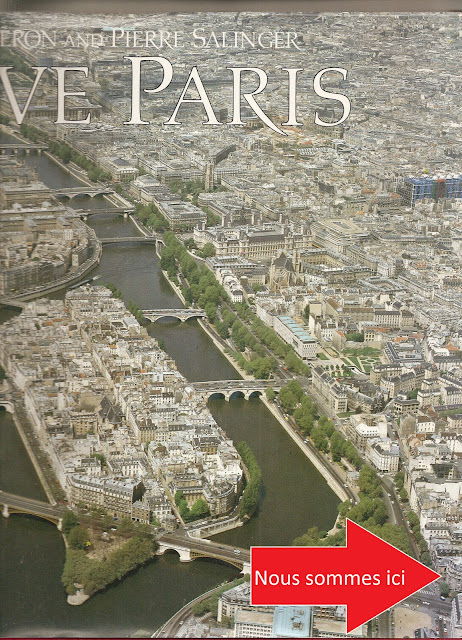 Yes, the arrow is actually pointing to our apartment building in the 4th arrondissement in Paris.

For those of you who want to take a closer look at where we will be living for the next year, paste this link into your browser:
http://www.sabbaticalhomes.com/Home_Rent_House_Rental_Paris_France_36173.htm

The area is known and le Marais. The neighborhood is best described in the following way: "The residents of le Marais are mainly elegant people called Bobo's, meaning bohemian bourgeois: they have the best standards of living, good values, lots of savoir-vivre, and are unconventional and multicultural. They love American and English visitors and most of them speak good English. Being so open to differences and respecting them made it possible to have a big Jewish community in this district, around rue des Rosiers, one of the biggest Gay communities in Europe around rue Sainte Croix de Bretonnerie, and more artists and creative people living here than in any other district of Paris." Hmm... can't wait to see what it feels like to be a 'Bobo' for a year. Hopefully I won't resemble anything like the clown. Oops, I'm getting confused with "Bozo". Nevermind. Anyway, sounds like we're moving to an area that's part Castro district and part Berkeley. When we said we're ready for a change, we really meant it- au revoir suburbia!
Posted by ma vie est arrivée at 10:36 AM