We have been living in Paris for two months and this has been the week that has cemented, for me at least, that we are acclimated and in a groove.

I have read that the local neighborhood merchants will not warm up to you until you have patronized their shop many times and proven yourself to be a polite and loyal customer. Many authors have written books about living in Paris and, in particular, about their satisfaction when they received their first hard earned smile and recognition from a particular merchant. I am happy to report that I have now attained this. With the butcher, the baker, (I have yet to visit a candlestick maker) or the florist? Nope. That would be too mainstream.

I have earned the good graces of the sushi merchant. I buy a daily baguette, but have yet to earn any recognition for my efforts there. But Mr. Sushi, who hails from Istanbul, waves to me and gives me a big smile every time I pass by his shop. Which is almost daily. When I do venture inside his shop weekly, to make a purchase, I walk away with lots of freebies: Fruit salad, extra chicken skewers, miso soup, even dessert. And no, don't get any ideas, Soren gets freebies from him too. But Mr. Sushi's waves and smiles seem to be reserved especially for me. I don't even care that I am buying Turkish sushi. Or that I have been in Paris for two months and have yet to obtain waves and smiles of recognition from the baker or the florist. Mr. Sushi's good graces are just as valid as any of those other "Frenchie" merchants'. This is one time when I am going to ignore possible, and probable, cultural differences in favor of stroking my own ego.

One day, as I ordered my sushi take-out, in my not-so-perfect French, Mr. Sushi jovially spoke French to me. At the time, there was a woman in his shop purchasing sushi too and she politely corrected my usage of the feminine "une" when I should have used the masculine "un" instead. I said, "Merci," to her and she replied, "You're welcome." Clearly, there are several issues with my French that readily give me away as a native English speaker. So, I put this woman to work as my translator and asked her to tell me what Mr. Sushi was saying to me. She explained that he was giving me a compliment by telling me that I am very brave to live here with my daughters and that I am doing a good thing by trying to speak the language and fit in. Mr. Sushi went on to explain that when he and his family came to Paris from Istanbul years ago they too had to learn the language.

I have concluded that I can ignore the cultural differences in this instance because, even though Mr. Sushi and I do not speak the same language, anyone, even the French, I believe, speak the language of empathy.

Now, on to more examples from this week that let me know we have come into our French life:

1. Raelyn had her first dream. In French.
2. I received my first voice mail message. In French. (And I haven't a clue who it is or what she is saying!)
3. My children are correcting my French.
4. My children are now behaving like polite French children, by saying, "Bonjour/Au revoir Monsieur/Madame," upon entering/exiting a place of business.
5. My children love walking everywhere.
6. Raelyn told some children who were confused about Nola's entry into the girls' bathroom, "Ma soeur est une fille."(My sister is a girl.)
7. Nola has chosen some new boots. They are girl boots. She says they are her favorite pair of shoes she has ever owned. Not sure if this is a calculated move due to the bathroom confusion or if she is just plain in love with them because they're killer Euro-style boots?
8. We have a social life. It's not the same as back home, and never a replacement for what we have back home, but it's nice to know people here.
9. I am not afraid to go anywhere by myself anymore (terrorists are crimping the 'go anywhere' part, however).
10. I now know all the best places to shop. For clothes, at least.
11. I know shortcuts in our neighborhood.
12. We now know to dress in layers.
13. And to bring umbrellas.
14. And that we will get sweaty riding the metro, even when it is cold outside.
15. We know that when it is time for the girls to go to bed, our upstairs neighbor will begin to play the piano  (it would be nice if they could play a lullaby).
16. We recognize the neighborhood homeless folks and the elderly folks, most of whom we see on a daily basis out and about.
17. I am now certain that we will not be getting a clothes dryer in the apartment. And yet, I am quite used to the routine of hanging everything on the drying rack. The resulting stiff denim? That, I will never get used to.
18. I can ask for the following. In French: a full meal, a bouquet wrapped with extra greenery, my and my childrens' shoe sizes, ice cream details (cup vs. cone, single scoop vs. double), if they have... (insert noun here), where is... (insert noun here), I have a problem with... (insert issue here). Bathroom rain demanded that I learn the "J'ai un problème avec...".
19. I will be reminded by the Metro agent to say, "Bonjour," if I forget my manners. This happened to both Soren and me. We both had the same metro ticket problem (at separate times) and, in our stress and haste (since the girls were already through the turnstyle waiting on the other side), we presented our problem to the agent without saying "bonjour" first. Big no-no. I am actually reluctant to show my face there again, but given that this occurred at the Metro station in front of our apartment building, I have to.
20. I possess two photo I.D. cards. In French. My Metro 'Navigo' card and my gym card. Even the French can't make an I.D. photo look flattering.
21. We have received our first gas bill and written our first check from our French bank account.
22. I actually wore shorts, with over-the-knee socks and tall boots the other day. Seriously! It's no longer true, what they say about 'the French don't wear shorts'. The women do. With tons of style, of course. Not exactly sure I pulled off the look, but I gave it my best shot. Mr. Sushi would be please to know that I am still trying to fit in. 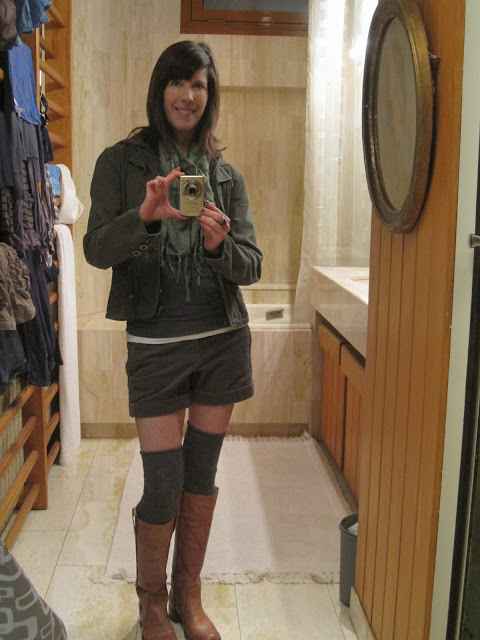