Last Tuesday, the girls had their fourth forced vacation day from school due to continued strikes.  We took advantage of the situation and took an actual vacation. Well, a mini one at least. Fortunately, Soren's work schedule allowed for this as he had no travel plans and no conference calls scheduled. Since the girls don't have school on Wednesdays an overnight trip to Normandy seemed like a good choice of destination.

On Monday night, we began to second guess our road trip decision. This is because the strikes were causing fuel shortages and we had been warned that beginning on Tuesday, the truckers were going to strike. This means that the truck drivers block the roads with their big rigs. We decided that we would leave as early as possible and hopefully make it out of town before any blockages occurred. We also figured that our rental car would have a full tank of gas and this might just be enough to last for the duration of our road trip. We had also been hearing about possible food shortages due to the fact that without fuel and without willing truck drivers, grocery store shelves would become bare. Planning ahead, Soren went to our local grocery to stock up on non-perishables so our cupboards would not be bare upon returning home from our trip. Lastly, we figured that if we experienced road blockages or difficulty finding fuel, it would just make for good blog material. So bring it!

Soren left our apartment early on Tuesday morning to pick up our rental car when the agency opened at 6:30 a.m. He then drove the short distance back to pick us up. The girls and I were waiting on the sidewalk when he pulled up in a little VW Golf. He was excited to drive a stick shift, it had been twenty years since the last time. Soren said it's like riding a bike, you never forget. I, however, have never driven a stick shift. On the one hand, I was relieved to not have any possible way to have to drive our rental car, yet I was also concerned that I had no possible way to drive our rental car if necessary.

We got out of Paris quickly and easily, thanks to Vivienne, our lovely French GPS guide. She efficiently recalculated our route when we failed to count all of the Arc de Triomphe roundabout exits and drove one exit too far. It was a lovely way to exit Paris and because of this, we did not mind our counting error.

One thing we did not anticipate were all of the toll booths that we encountered. The euro issues 2 and 5 euro coins which is very useful and came in handy since I fortunately had a lot of change in my wallet. Back home, a lot of change in my wallet means a bunch of almost useless pennies. Here, a lot of change in my wallet means we can pay our tolls on a road trip. Toll booths are numerous and they are not present only at bridges. They are scattered along the highways fairly frequently and the tolls range from 1.30 euros to 7.50 euros. That means we paid $1.85 to $10.35 U.S. for all tolls. Twice! They get ya on the way back too. All in all, we calculated that we spent approximately $40 on tolls for the trip. To their credit, the roads were very smooth and well-kept. We now possess a new frame of reference to take back home with us when the Bay Area raises their bridge tolls.

We stayed in the picturesque town of Honfleur which is a port town situated on an estuary of the Seine River.  We had our favorite breakfast yet at a cafe overlooking the harbor. Little surprise since the name of our breakfast platter was called, "Sucre". Sugar, that is. Our meal consisted of a huge platter overflowing with buttery croissants and baguettes. Alongside came a tray filled with jam, Nutella, butter, and sugar sticks. In addition to OJ, the girls were served steaming hot chocolate while Soren and I restrained ourselves with our pots of hot tea. Natural yogurt was the final touch which we customized by adding jam and a bit of sugar on top. This was enjoyed while eating outside and enjoying the cold, but sunny morning. 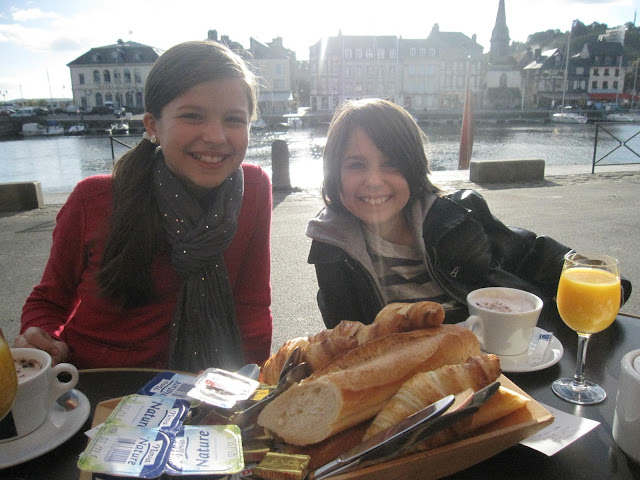 We drove to Caen, home to the Memorial de Caen, a war memorial museum commemorating WWII and specifically, the battle of Normandy and the events leading up to and after D-day. Given that it was a weekday and there were fewer travelers on the road than usual (probably because they are not keeping a blog and had no reason to risk the potential inconveniences of the strikes), we practically had the museum to ourselves. Our visit began with a film showing footage of the last-minute preparations for the D-day landing, the landing, and the subsequent battle. The amazing thing about this film was that there was no dialogue, it was only accompanied by music, and it was displayed in split-screen. The left side of the screen showed the U.S. military footage while the right side simultaneously showed the German military footage. It was eerie to watch the Germans preparing their bunkers for the invasion when we, the viewers, already know the gruesome outcome: Over 10,000 U.S. troops killed on those Normandy beaches in one day. One fact we learned from watching this film: The Canadian allies bombed a section of railway track and moments later, the train carrying German supplies for this battle (tanks, ammunitions, etc.) barreled off the destroyed track and crashed on the hillside below, delivering a devastating blow to the Germans and their ability to adequately fight off the U.S. and their allies in Normandy. The footage seemed surreal and I kept wanting to believe it was just a movie, not an actual battle that had occurred. 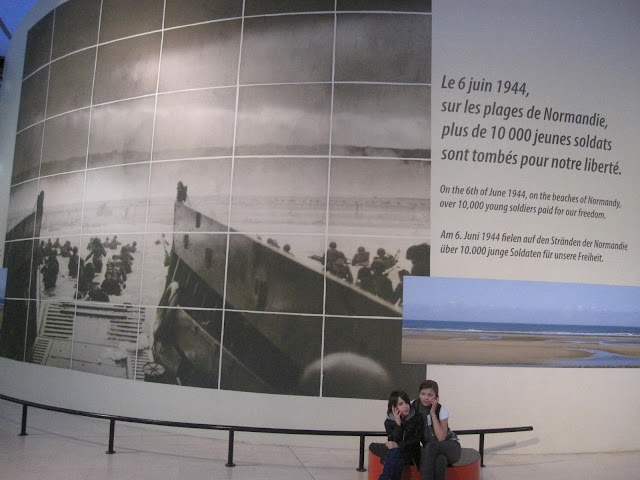 One of the aspects of the museum that we had anticipated and had to brief the girls upon prior to viewing was the Holocaust and, specifically, our connection to Judaism and their likely questions about our relatives and even ourselves due to this heritage. How does one adequately prepare oneself, let alone a child, for the horrific images and documentation of human genocide? How does a parent respond to, "Daddy, if we were living in France during WWII, would that have happened to us because we have a Jewish name?" "Would we have had to wear a yellow star on our clothing?" "Would we have hidden? Where?" And, of course, the inevitable question that does not restrict itself to children alone, "Why?" No historian, museum, philosopher, religion, book, or parent could ever adequately answer that question. 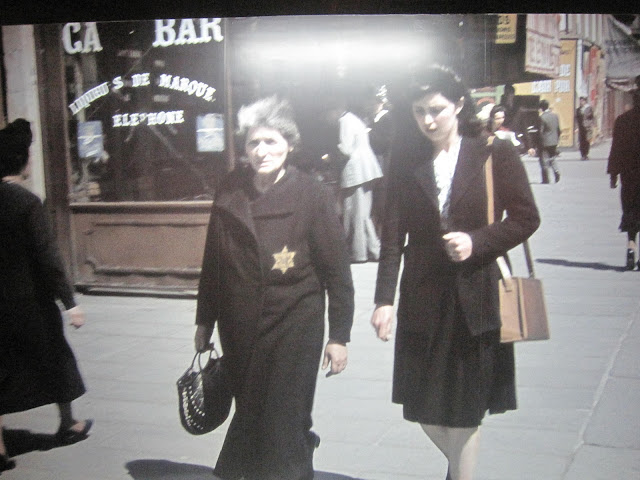 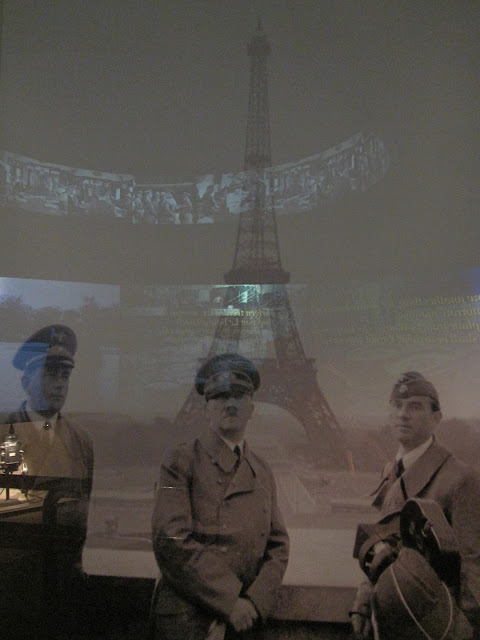 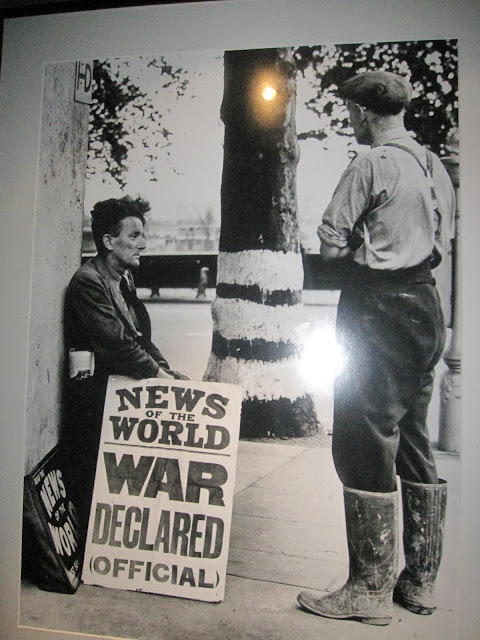 I am ashamed to admit it, but I have always been unclear as to the connection between Europe and WWII and Japan's bombing of Pearl Harbor and their involvement in WWII. I must have been absent from school on that day, yeah, that's it! Anyway, I am happy to now have this knowledge thanks to this museum's audio headset that made up for my lack of applying myself in World History class. It never did occur to me to just Google it. If it had, I'd spend all my waking hours on Google trying to learn everything that I should have back in high school rather than writing this blog.

On Wednesday, we drove from Honfleur to Le Mont Saint Michel on the border of Normandy and Brittany. This rocky tidal island is out in the middle of nowhere and this feeling was heightened by the fact that we arrived during low tide which meant we were surrounded by surreal mudflats that looked like they belong in a Dali painting. The abbey here was built in the 8th century and it was used as a prison during the French Revolution.  We opted out of the guided tour in the interest of time and instead explored on our own. I do wish we could have also been there during high tide to compare and contrast the difference in look and feel. 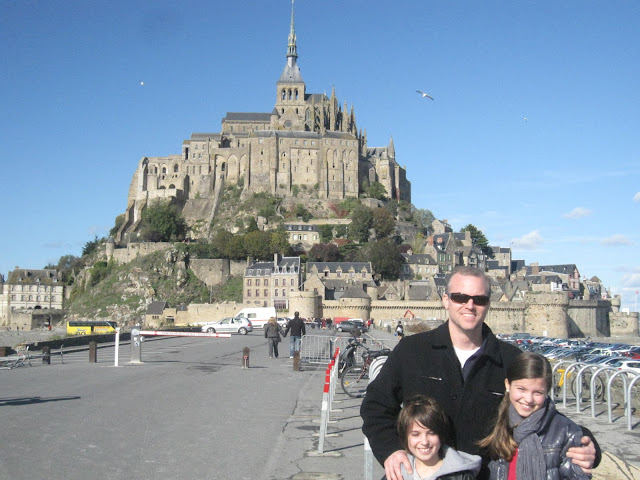 There were two factors that combined to make us feel a bit pressed for time while at Mont Saint Michel. First, due to most European hotel rooms being limited to two or three occupants due to size, a family of four must reserve two hotel rooms. The girls were a bit unsettled about being in a non-adjoining room by themselves so this meant that for our night in Honfleur, my bedmate was Raelyn and Soren's was Nola. This provided a great excuse for daughter cuddle-time. The next morning, none of us knew if the others had woken yet. Raelyn and I thought for sure that Soren and Nola would sleep later so upon waking, we spent our time reading. There was something wrong with the shower in our room so we decided to wait and use theirs. Next door, Soren and Nola were awake, showered, and reading, waiting for us. Finally, they knocked on our door and we discovered that we had all been awake for over an hour waiting for each other. We got a later start than anticipated since they had to then wait for me and Raelyn to shower and dress. We decided that next time we find ourselves in adjacent hotel rooms, we will knock on each others' walls. Two knocks = We're awake. Three knocks = We're asleep!


The second reason we felt pressed for time is that we knew we needed to find fuel for our trip back to Paris. We knew that even if we succeed in finding a gas station with fuel, we had seen on the news that the lines were extremely long. We also did not know what amount of traffic to expect heading back into Paris, or, if the truckers would still be blockading our route out of Normandy or back into Paris. We left Mont Saint Michel with these unknowns fearing the worst. Afterall, at the museum yesterday, we saw a woman reading a newspaper with an alarming headline. Nevertheless, we hoped for the best.

Good news. We found fuel! Long line, but we were relieved so we didn't care. What we did not understand initially is that you pump first, regardless of payment type, and pay last. Unfortunately, we were behind a driver who did not move his car after pumping and made us wait while he payed. The other drivers were more courteous and pulled up to the parking spaces outside of the minimart so as not to hold up the fueling lines. Oh, and this little piece of information should make you feel better about Bay Area gas prices: We payed over $8.00 per gallon!


One of our final highlights was viewing a beautiful full rainbow across the sky as we drove down the highway out of Normandy. It was incredibly moving and spiritual, well, at least as far as Soren was concerned.


For those of you who know Soren, well, he can be a bit of a nut. In this case, he was inspired by the following video that he had seen recently. He couldn't help but wonder if he too would wind up on Jimmy Kimmel Live like this guy did: http://www.youtube.com/watch?v=OQSNhk5ICTI&feature=related
I don't think he'll find himself on a couch opposite a late night talk show host anytime soon, but we girls sure did appreciate the good laughs he provided for us in the car.  Now that he has set a new bar for road trip entertainment, we can't wait to see what he comes up with next.