Last evening's soiree at Raelyn's and Nola's school was a complete success. I dug deep and resolved to be brave and with mini peanut butter and jelly sandwiches in hand, we attended what turned out to be a very fun and festive occasion. I was pleasantly surprised in that I did indeed manage to socialize. As luck would have it, the day prior to this party, a new American family moved to Paris and their nine-year-old daughter is now in the girls' class. Her mother and I were each other's comfort which worked out very well for us both.

The girls brainstormed American food ideas (the parameters were that it could not be a hot dish and it must be easy to transport via the Metro). We settled upon the sandwiches, breaking away from our normal standards of wheat bread with organic peanut butter and organic jam. We're representing America- we must not disappoint. That means white bread, Skippy's peanut butter, and, here in France, confiture Bonne Maman.

Earlier that day, while at school, Raelyn mentioned to a French classmate what we were bringing. The classmate replied, "Nobody ever brings sandwiches." Just one more reason for me to feel nervous. This girl's reply even made Raelyn feel unsure about our choice of buffet contribution. The girls and I created a sandwich-making assembly line on the kitchen table. Raelyn: peanut butter. Me: jam. Nola: cutting (that girl loves to use knives any chance she gets). We made 80 mini sandwiches in all.

The children had access to the buffet in the cafeteria while the parents socialized in the adjacent multi-purpose room with soup and vin chaud (hot wine). At separate times, Raelyn and Nola came to find me to report the status of our sandwich tray. "Mom," they said, "There's only like five left!", and, "Alessia says she loves them!" This, from the girl who earlier stated that nobody brings sandwiches. Guess we showed her eh? The mini PB&Js were all gobbled up. I even saw a Chinese mother with a few on her plate. I wonder how often a Chinese person in Paris eats PB&J? I'm so glad we were able to provide people with an American cultural experience of the highest standards. 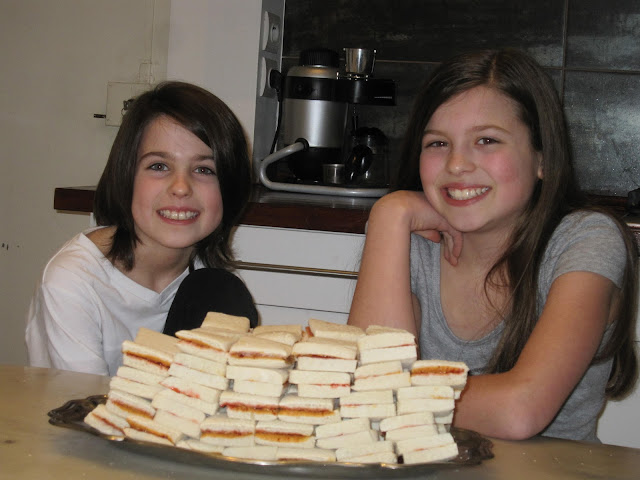