Yesterday afternoon marked a milestone for us. We had a playdate. Although, Nola does not consider it a true playdate because it did not occur at someone's home. Instead, it occurred at the park near the girls' school. I am not sure if playdates (do Parisians even use this term?) occur in people's homes here since Parisians are apartment dwellers without the luxury of playrooms, backyards, play structures, pools, and Wii. Well, maybe Wii, but my guess is the living room furniture would have to be pushed against the walls to make space for playing.

The two Italian brothers that I mentioned in my previous post (Raelyn's 1st Day of School, Take 2), Frederico and Leonardo, have become good buddies with Nola, and now Raelyn too. I see their mom waiting to pick them up outside the school gates every afternoon. We wave to each other and smile.  She says, "Ciao," and I say, "Bonjour," as I have been conditioned to do here. Then I quickly remember that she does not speak French so I instinctively say, "Hello," then I remember that she does not speak English either, and I finally wise up and say, "Ciao," back. Then she speaks a lot of Italian to me with maybe a half of an English word thrown in, and she says 'Nola', that much I get, but nothing else computes. She seems so very nice and I so wish we could communicate successfully. Finally, the light-bulb moment occurs and I say, "E-mail?" And she replies, "Si, si!". I dig out one of Soren's business cards with my e-mail address written on it for just such an occasion. Then she says the first real phrase I understand, "Google Translator." I nod enthusiastically.

On the way home from school, Nola would like to know if we can set up a playdate. No, but Google Translator can! So began my correspondence with Palma, who I found out is a criminal attorney in Rome where she and her Columbian-born husband live. Luis Enrique is a fashion photographer on assignment here in Paris. They have been here for four months. Unfortunately, she must return to Rome for work this Sunday. Her husband and sons will return to Rome in December when his assignment concludes. Darn! We only get this nice family for such a short time. I have not shared this news with the girls just yet. Nola, especially, will be heartbroken.

Having been here for three months longer than we have, Palma has a bevy of helpful information to share that I'm sure I would have learned for myself as time went on, but it's really nice to know these things now. She Google Translated to me the location of the best library in our neighborhood and the scoop on where adults can take great French classes for free. The funny thing is, Google Translator is about as proficient in its language skills as any almost, but not quite, fluent individual. Which means, reading these not quite perfect translated messages is a crack-up. For instance, take this message, copied and pasted here, that I just received from Palma: perhaps already know, but I only discovered today that we can leave the kids at school until 18.00 and there are tasks. Federico and Leonardo, on Monday started doing this a long time again.


The playdate afternoon arrives and waiting in front of the school gates is not only Palma, but her husband Luis Enrique too. It turns out, he does speak a tiny bit of English, but he rarely uses it so I can tell he is feeling a bit challenged at first. He tells me that his sons can help with translating during the playdate. He claims their English is better than his. I compliment him that if he can communicate all of that to me in English, he's way ahead of me in terms of my French. Sadly, I did not retain much of my high-school Spanish to enable me to converse with him in his native language.


It is a sunny day in Paris which we need to relish in because the sun will rarely be seen here for five months pretty soon. It seems as if all the locals know this too because the park is crowded. Every bench is occupied. Young, old, individuals, families. Everyone is outside enjoying the gorgeous weather. The kids, who are starving, scarf down their snack and run off to play. Then real fun begins. Adult conversation-time. In other words, Charades, Password, and Pictionary. I felt as though it was game-night at the park. The three of us pantomimed a great deal.  Luis Enrique, translating in English, would often struggle for a word or two, giving me just enough of a clue as to what he was aiming to say, so that I would blurt out associated words hoping that I would guess the correct word that would further the conversation along, and  Frederico drew pictures in the sand when he and his dad didn't know the English words. His sand drawings of a mailbox and envelope were quite impressive. I am  fairly certain that they were trying to tell me that in order to register for the free French classes, I must include a self-addressed stamped envelope with my registration form. Beat that Pictionary experts!


As in Lake Tahoe, I find this to be true in Paris too: If you don't like the weather, wait five minutes and it will change. At least that is what my granny used to say. It began to rain. Thus, our playdate came to a conclusion. We were sad to part, especially because I know my time with Palma is ending before it really begins, but I am convinced, more than ever, that no matter where you go, delightful people are waiting to be found.

Yikes! I don't know why the last half of my post is displaying a white background and a differnt font. Guess cutting and pasting from my e-mail messes things up. Where is my IT tech when I need him? 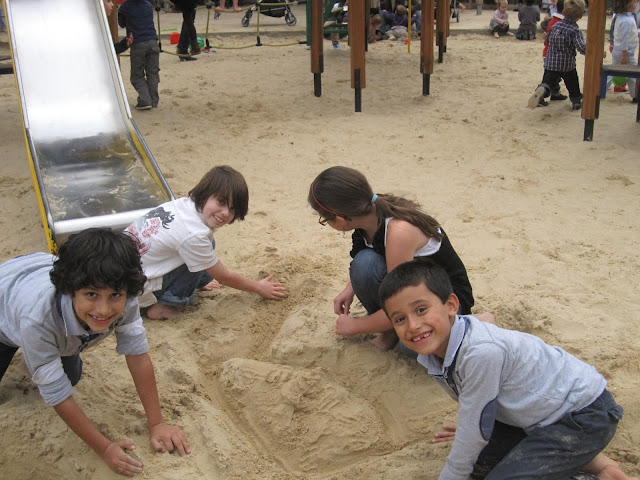