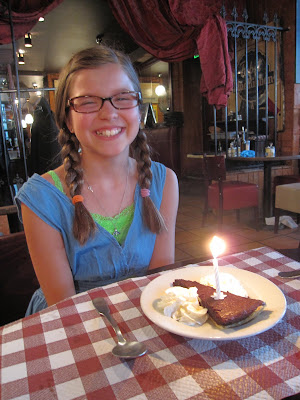 How did this happen? Has it really been eleven years since Soren and I became parents? As all parents know, time flies. But not when you are awaiting the fate of your daughter's French school placement. It is now two days prior to the start of school and still no letter from CASNAV. We manage to put it out of our minds (or at least do a decent job pretending to anyway) and enjoy our "queen" for the day. We told Raelyn that she gets to choose the birthday outing and the locale for the birthday meal. After much deliberation, checking the forecast, and negotiating with Nola about her own upcoming birthday outing (Sept. 6th), Raelyn finally decided that she would like to spend the day at Cité des Sciences et de L'industrie. This museum offers many fun kid-oriented features such as a gleaming silver Geode dome that shows IMAX films, a planetarium, a spy submarine built during the Cold War for the French navy, a greenhouse, and even an exhibit that lets you make the Mona Lisa speak in your own voice while you control her facial expressions. It's much better than that little ol' painting over at the Louvre. Raelyn wanted to peruse the menus of the sidewalk cafes across the street from the museum. There were a handful to choose from. She chose a winner. A bustling cafe with delicious-looking food and a nice ambiance. Never one to shy away from the limelight, Raelyn asked Soren to tell our waitress that it was her birthday. She didn't know that French waiters don't have a custom of surrounding your table while enticing other diners to join in a rousing rendition of "Happy Birthday To You" while a cheesy hat is placed upon your head and a measly birthday dessert with spoons for each member of your family is presented to you. Nevertheless, Soren was a doting birthday dad and he told our waitress that it was indeed his daugther's bon anniversaire aujourd'hui. Our waitress didn't seem to think much of this. So, it was to our surprise that upon the conclusion of our meal, she brought Raelyn a delicious piece of tarte de chocolat with a lit candle while the restaurant's sound system blared a version of "Happy Birthday" that we have never before heard. I was waiting for the rest of the wait staff and other diners to join in. No one did. I was also secretly waiting for the waitress to bring extra spoons. She didn't. But Raelyn was beaming. She got her moment of birthday glory and a whole slice of tarte de chocolat to herself. Okay, she did actually share a small bite. She's lucky I didn't have my own spoon, it was delicious!