As many of you know, I am a die-hard U2 fan. I try to see their show every time they come to town, and have been doing so since I was fourteen. Therefore, I have been to many U2 concerts. Never have I made it onstage though. I have tried. Got close once in my early 20's. Some security guard thought it was his duty to pull me off the stage just as I had reached my fingertips to it and was trying with all my might to hoist myself up. Audience members had just started to give me a boost from behind too, but Mr. Security put an end to that quick. I was defeated and Bono missed out on his golden opportunity. If he hadn't been so busy singing and preening for the audience, he could have given me a helping hand himself.  Now that I am 40, I probably need to delete this desire from my Bucket List. Nah.

I have my first ticket stub from 1985 when U2 played at the Cow Palace in San Francisco during their Unforgettable Fire Tour. Can you believe that the cost of a ticket was only $16.50 back then? I feel like an elderly person even mentioning that... "I remember when a loaf of bread cost a nickel. And I had to walk 5 miles to and from school everyday. In the snow!"  I'm not even going to mention what a U2 ticket goes for these days, but let's just say, it's a bit more than $16.50.

As a long-time U2.com fan club member, I have priority status for purchasing pre-sale concert tickets. That at least guarantees that I am paying face-value for the tickets. I recall a handful of years ago, I must have slept through the pre-sale announcement and purchasing window (the tickets always sell out within minutes) and later wound up buying two tickets off Craigslist  for an insane markup. They were great seats so that helped me justify the cost a little more easily. The only bummer was, we happened to be seated next to Young Mother of Three Babies. She partied a bit too much prior to taking her seat. She was happily slurring this data to us and ready to be our friend for the evening. So much so, that when we stood up to cheer for the band as they took to the stage, Soren exclaimed loudly into my ear, "She's holding my hand!" By the end of the first song, she was passed out in her seat, but leaning over into Soren's. I asked her husband to move her upper body over onto his seat instead. Better yet, I suggested, take her up to lie on a cot in the first aid station where she can let her body do what it will eventually need to do. He blew off my suggestion. I won't go into the gory details of what happened 20 minutes later, but let's just say that she disrupted the concert experience not only for us, but for the handful of folks seated in front of her too. Needless to say, we were very lucky to be sitting next to, and not in front of, YMTB. How's that for an acronym?

Last October, after years of successfully brainwashing our daughters to love U2, we surprised them with concert tickets for their birthdays. This was about the time that we decided, when feasible, we want to gift them experiences rather than things. They don't need more stuff. I was also pleased to be able to follow through on my promise that their first concert was going to be a real concert. Not a Hannah Montana or a Jonas Brothers puppet-mastered production. Raelyn and Nola seemed genuinely elated to be going to their first real concert. Another brainwashing success!

This time, however, U2 was not stopping in San Francisco or Oakland. Time to put Soren's many frequent flier miles to use and head to Las Vegas to catch their show. Kids in Vegas you ask? We did too. With some trepidation about the kinds of things our girls were going to be exposed to, we headed to "Disneyland for Adults" and spent our daytime hours in Circus Circus and other kid-friendly attractions. It was impossible for us to walk down the strip and avoid seeing the dozens of taxi cab ads and billboards on wheels displaying all things Vegas. It prompted questions from and discussions with the girls that helped put their confusion into the context that is gender bias and exploitation. We challenged them to find a billboard displaying men in the same way. They spotted one. Off the main strip, peeking out from behind the tippy top of the Circus Circus high-rise. Thunder From Down Under. Shirtless Australian men with the top button of their jeans undone. The girls quickly decided that the men were not quite as exposed as the women. Not fair! Soren was amused when we suggested that he could be a Thunder From Down Under man. But I digress.

As for the concert, at UNLV stadium, the first thing we noticed was how dressed up our fellow concert-goers were. Plunging cocktail dresses for ladies, shiny button up shirts and jeans that cost as much as an iPhone for guys. We were in our usual concert gear; jeans, comfortable shoes, and layers for unpredictable temperature changes. We clearly did not receive the memo about dress code for a Vegas concert. We also did not receive the memo about the 4-drink minimum either. And that was probably just the pre-show average for most of those in attendance. Take for example, the three 40-something women seated directly in front of us. They arrived, intoxicated, drinks in hand. They were having a great time. However, Ms. Middle (as she wound up, out of necessity, taking this position between her two friends) continued to booze it up, even after her friends attempted to take her umpteenth drink away from her. She would have none of that caretaking. As her wobbling increased throughout the show, she turned around several times and stumbled towards Raelyn, giving my poor girl a faceful of augmented breasts. Ms. Middle made up for this when she drunkenly purchased cotton candy from the passing vendor. It took her several minutes to muster up the manual dexterity to pull out the bills from her wallet, but after doing so and paying for her treat, she took one bite of the flourescent cloud-on-a-stick, turned around, lurched toward Raelyn and said, "Here ya go!" and Raelyn became the delighted owner of this cotton candy.

Towards the end of the concert, Ms. Middle had grown tired of being held steady on either side by her friends so she took her seat, slumped forward, and passed out, occasionally lifting her head to cheer, "Woo hoo!" The girls wondered why she was so tired and how could she sleep with all this noise? We reminded them, "Remember what we told you about what happens to people when they have too many grown up drinks? It happened to her." They inquired further, "Is she going to get sick? Like the lady at your last U2 concert? Is this what happens at every concert?" Fortunately, Ms. Middle, or 'Boobs', as Raelyn decided to call her, refrained from getting sick at the show. Later, we capitalized on this real-life example by asking them, "What would happen if she tried to drive a car like that? Do you think she should drive her friends home from the concert? Why not?"  Thanks life, you're a great teacher!

Last Fall, when I received my U2.com e-mail announcement about European tour dates I, of course, checked to see if they were playing in Paris. Indeed they were and soon enough, I was the contented owner of four tickets to their only Paris show. Another experience to gift the girls. How nice of U2 to plan their tour dates near our daughters' birthdays.

Soren's plane from Chicago was due to land in Paris the day of the concert. I let him know that if his plane was late, we were going without him and he could meet us there. After ten days in Paris without him, I was feeling confident enough that I could manage to get ourselves to Stade de France via the Metro and the RER without much confusion.  Fortunately, he arrived on-time and we were able to squeeze in a nap in preparation for our late-night ahead.

Getting to the stadium was easy, although I almost lost my camera because I dropped it on the Metro platform and watched it bounce towards the edge and stop a few inches away from plunging to the tracks below. Raelyn and Nola were curious to know if I would have jumped down to retrieve it. Only if it had happened after the concert and my U2 photos were on that camera.

Outside Stade de France, there are lots of food vendors selling delicious-looking baguettes, North African cuisine, sandwiches, and beverages. I wish I had known to expect this. Suddenly, the picnic I had packed didn't seem so appealing. We felt like we were in the land of normal this time, as the concert-goers were dressed like, well, concert-goers.

The show was great, as usual.  U2 changed it up a bit from their North American tour, changing their stage entrance, introduction, and throwing in a couple of new songs (which, sadly, meant they had to cut a couple of their other songs I would have preferred to hear). Bono spoke some French so he must know about Google Translater too.

The girls, especially Raelyn, sang along and stood for the entire concert. Nola pooped out towards the end and was sleepy. When a woman from the audience got up onstage both girls said to me, "Mom, that should have been you!" Sadly, even my pre-sale U2.com status can't get me tickets that close to the stage. Raelyn and Nola decided that the only thing the Vegas show had over the Paris show was the opening band. They wished the Black Eyed Peas could have opened here in Paris too. But, overall, they think that Paris was the better show. Because of the songs played, the energy of the band, or the spirit of the audience? Nope. Because there were no drunk people.

My guess is that the French just hold their liquor better. 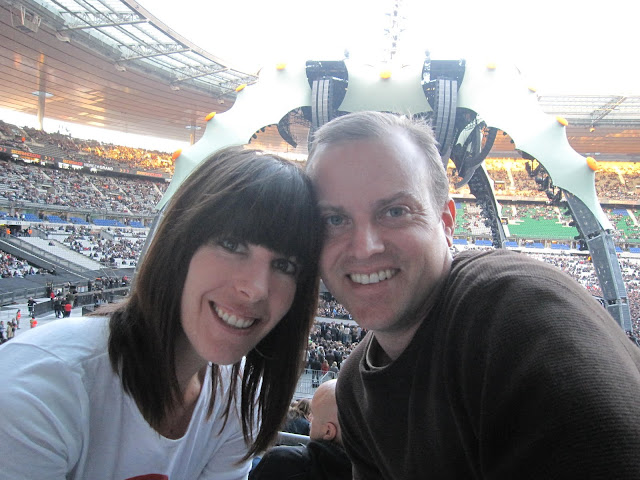 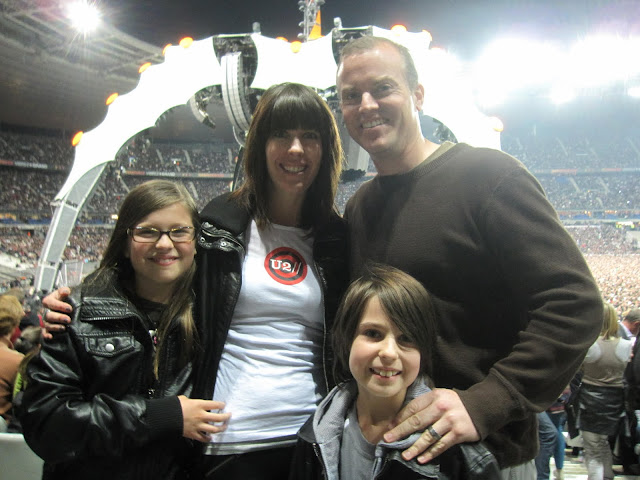 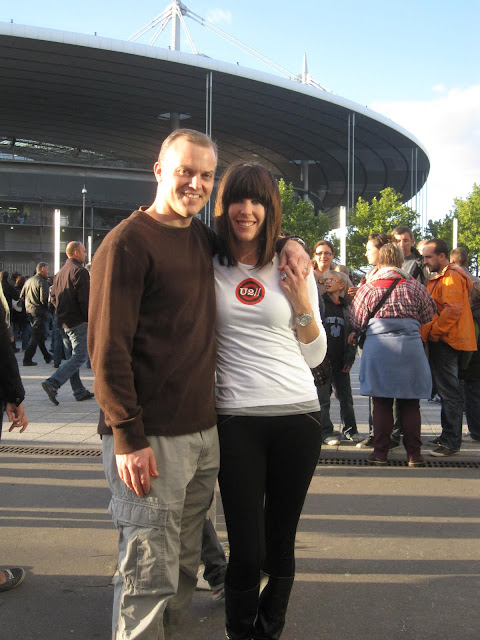